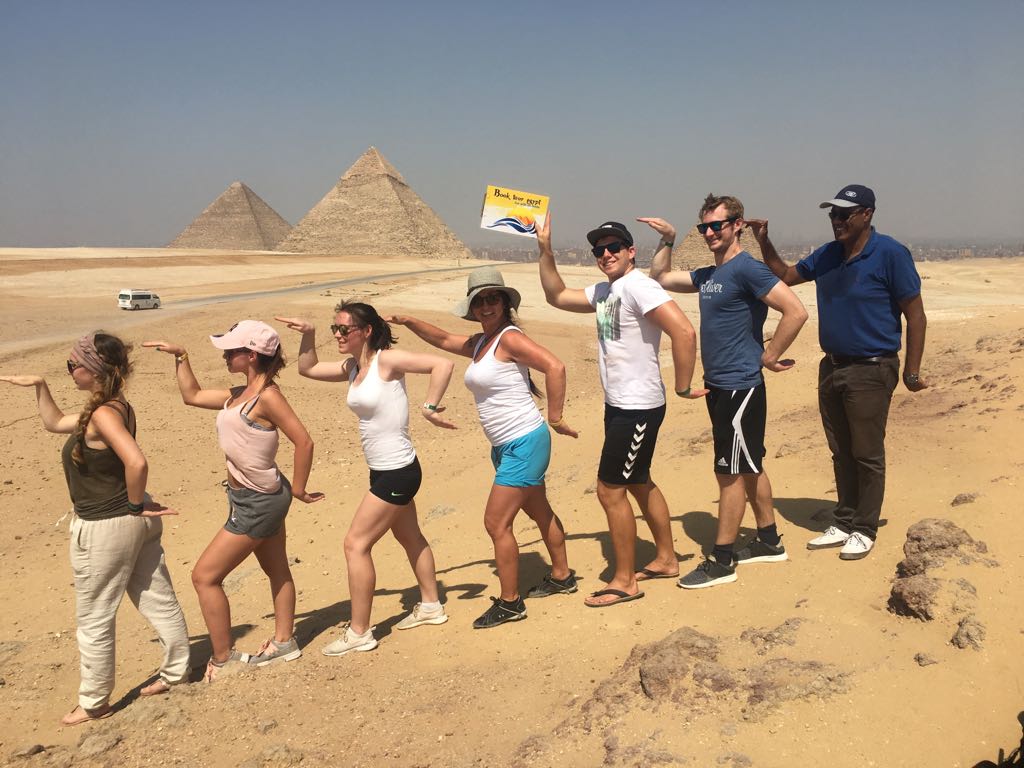 2 Day Tour to Cairo from El Gouna By Flight

Free Cancellation Up to 24 hours in advance Reserve Now & Pay later Secure your spot while staying flexible
Tweet
2 Day Tour to Cairo from El Gouna By Flight:visit the famous Pyramids of Giza, the Great Sphinx and the Egyptian Museum. On your two-days trip, you'll also have time to take a city tour of Cairo, immerse yourself into Egyptian life at Khan el Khalili Bazaar, and visit Mohamed Ali's Alabaster Mosque.

2 Day Tour to Cairo from El Gouna By Flight

-> Visit the capital of Egypt, the largest city in Africa and it is located on the longest river in Africa.
-> Visit the Egyptian Museum with its ancient exhibits
-> Marvel at the Pyramids of Giza and the Sphinx
-> Marvel at the beautiful Alabaster Mosque and the Khan El-Khalili bazaar
-> Discover the Step Pyramid Saqqara
-> City tour in the old town and in the modern district of Cairo
-> Overnight in a 5- or 4-star hotel with breakfast
-> Lunch in the restaurant on both days

The air-conditioned transfer bus picks you up from your hotel in El Gouna in the morning and takes you to Hurghada airport, where you board the plane to Cairo.
After a 45-minute flight, you will reach the metropolis in peace and can set off with your  tour guide directly on the way to the first sight,  the Egyptian Museum with its numerous treasures and exhibits from bygone days, such as the mask of Tutankhamun.
Afterwards you can enjoy your lunch in a local restaurant.
See Cairo from a different perspective during a Nile cruise.
Then head to the Great Pyramid of Cheops, the Chefren and Mykerinos Pyramids, and marvel at the monuments of yesteryear.
The transfer service will then drop you off at your Cairo hotel, where you can relax.

The second day of Program A will take you to Old Cairo: the Citadel of Salah El-Din and the alabaster mosque of Mohamed Ali are the first program item.
After a break for lunch in a restaurant, your guide will travel with you to the Coptic Church and Coptic Museum in Old Cairo, as well as the St. Sergius Church and Ben Ezra Synagogue.
Next to the two mentioned places of worship is the mosque Amr Ibn El-As in the Coptic quarter, Built in 642, it is the oldest mosque in Egypt and Africa, with its simple architecture, is a model for the buildings of subsequent epochs.
A visit to the famous Khan al Khalili Bazaar with its winding streets and small cafes is the final stage of your 2-days excursion to Cairo by Plane from El Gouna.
The transfer bus will take you back From Hurghada airport to your hotel in El Gouna after your landing.
PROGRAM A: 195 GBPS

The second day of Program B will take you to the Step Pyramid and Burial Tombs of Saqqara. Afterwards, take your typical lunch. The Coptic Church and the Coptic Museum are the first attractions you will visit in the afternoon. St. Sergius Church and Ben Ezra Synagogue are also part of Cairo's Old Town. With your guide you will not only visit these two sights, but also the mosque Amr Ibn El-As in the Coptic district. Built in 642, it is the oldest mosque in Egypt and, with its simple architecture, is a model for the buildings of subsequent epochs. The conclusion of your two-day trip to Cairo from Hurghada by plane is the Khan El Khalili bazaar with its cozy cafes and narrow streets. The transfer bus takes you back to your hotel in El Gouna after landing at Hurghada airport.
PROGRAM B: 205 GBPS
The two-day excursion from El Gouna to Cairo by plane can also be offered privately on request with individual program and private guide.
Please contact us if you are interested.
We would like to make for you an offer.